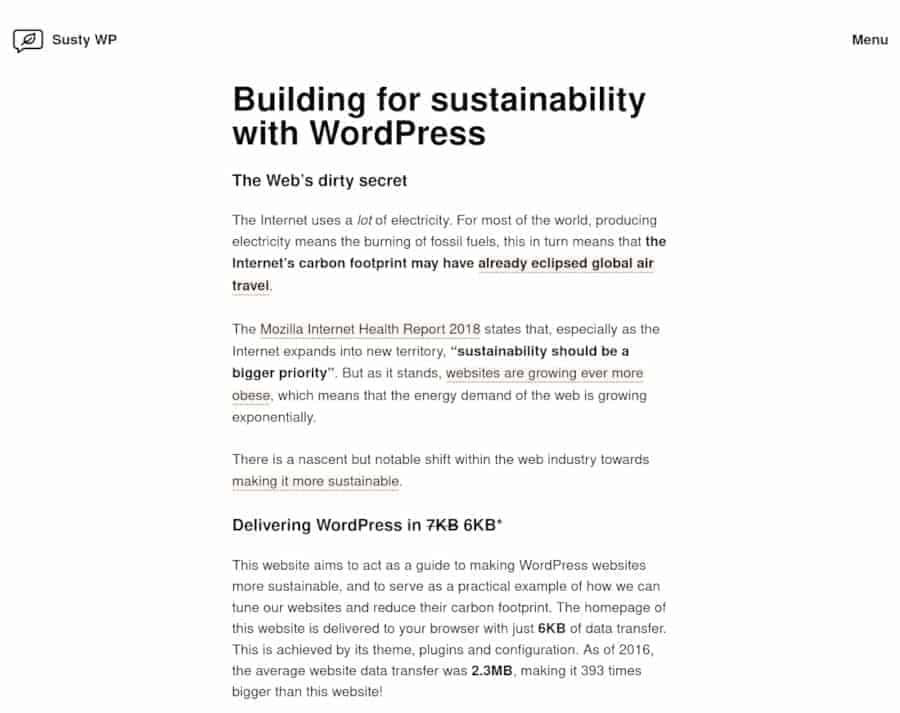 I have been musing on ‘how I publish’ a lot of late. This is in part because I am now blogging every day, but also because I am reading more of other people’s blogs than I have for some time. Some of the blogs are specifically about blogging. Two of the finer examples of this genre are from Kev Quirk and Marko Saric, the latter of whom is part of the brain trust behind the excellent analytics software Plausible.

In other cases, the bloggers may have a tech focus, but it is more how they have implemented their own publishing platforms. Ru Singh’s site is one of the more beautiful and minimalist examples of the genre. Doug Belshaw also has some wonderfully inventive approaches to his site design.

But I am getting ahead of myself, or rather, I am looking at the surface elements. Dig deeper, and there is another crucial element to a site: weight. Or rather, its bandwidth consumption. This moves thinking into a very rarefied atmosphere as the ‘modern’ web is all about features, with a general acceptance of the bloat that comes with them.

A notable exception to this rule comes in the shape of Susty, which delivers WordPress in less than 7kb. Yet the reason for this act of extreme minimalism is more than geeky pleasure, as Jake Lenox explains in his blog:

I learnt of the colossal energy demand of the Internet. That this  demand makes it the largest coal-fired machine on Earth, meaning that its CO₂ emissions are probably at least equivalent to global air travel. More and more people are coming online, but this coupled with the rise of ever more obese websites means that the Internet’s energy demands are growing exponentially.  Every additional byte transferred means more energy, which in most  countries means more CO₂.

It is widely accepted that we should avoid printing emails to save  trees, but this leads to a false assumption that the web is a green medium. I’m afraid to say, it is not.

This has started me on my own quest for a lighter footprint in my publishing platform, while acknowledging that minimalism can be taken a step too far. For example, when it militates against the provision of an engaging experience or prevents a writer from delivering content. To that end, there is much tinkering to do. Till the next instalment.

This post is day 076 of my #100DaysToOffload challenge. If you want to get involved, you can get more info from 100daystooffload.com.

Contributions are subject to guidelines, which can be viewed here.

This has started me on my own quest for a lighter footprint in my publishing platform. To that end, there is much tinkering to do.

This has started me on my own quest for a lighter footprint in my publishing platform. To that end, there is much tinkering to do.